Every week in the Chapel of St Pascual of Madrid in Spain ,
Mass is celebrated
according to the ancient Hispanic-Gothic-Mozarabic Rite
(every Tuesday 19’00 h.). 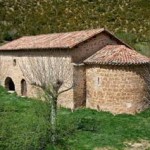 It is a liturgy of the Catholic Church born in the 4th century in the Iberian Peninsula
more precisely in the regions of the ancient Visigoth kingdom of Toledo –
which not only protected people’s faith from Arianism,
but was practiced during the centuries of Arab domination
(Mozarabic, in fact, means “among the Arabs”).

Come down to us with its very rich collection of prayers for the celebration of Mass,
its history is also a lesson in the inculturation of faith in a specific geographic area,
to such an extent that many people believe one cannot understand the spiritual roots of Spain ,
especially Biblical, Patristic spirituality and Marian devotion,
without taking account of this ancient Rite. 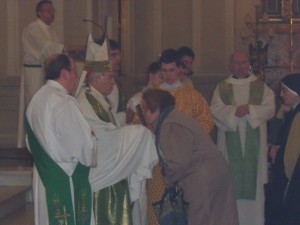 The Rite is celebrated daily in the Corpus Christi Chapel
(also called the Mozarabic Chapel) in the Cathedral of Toledo. 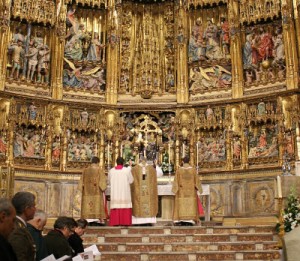 In Madrid Mozarabic or Gothic Rite is celebrated in Spanish every Tuesday
(Pº Recoletos 11 Monastery of Poor Clare Sisters, 19′ 00 h).

Additionally, all the churches of Toledo can annually celebrate this liturgy
on the Mozarabic Feast of the Incarnation on December 18,
and on the feast day of Saint Ildephonsus on January 23. 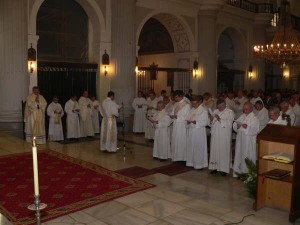 The Catholic Rite is also used on certain days each year
in the Talavera Chapel of the Old Cathedral of Salamanca
and less regularly in other cities in Spain. 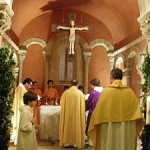 Pope John Paul II celebrated it in the year 1992. 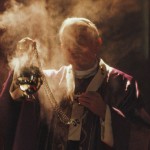